Skip to main content
You are here:
Home / World experts met at the UA to draft innovative guidelines and recommendations for lifelong learning centres 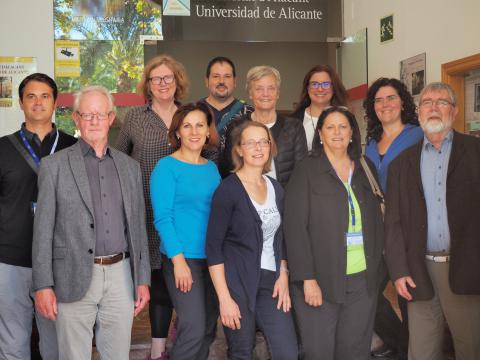 The University of Alicante hosted from Monday, 26 October 2015 the  Fourth Steering Committee Meeting of the BALL Project - Be Active through Lifelong Learning, where 45 world experts and researchers met on Monday and Tuesday (26 and 27 October).

BALL is a European Erasmus + project developed by the UA Vice President for Studies Planning, Training Actions & Quality Standards, within the context of the UA LifeLong Learning University, with the ultimate goal of analysing the state of readiness for retirement of European citizens. The team working on this project, funded by the EU, is composed of organisations with extensive experience in working with the elderly in three European countries. In the context of the meeting on 26th, the Fourth Steering Committee Meeting took place among whom representatives of various professional areas and private and public institutions, as well as experts from the fields of Geriatrics, Gerontology, Sociology, Psychology, Education for adults, and various business and professional sectors shared their ideas and assessed the proposals for action and the guidelines resulting from this fourth strategic meeting of experts.

The project addresses the urgent need for guidelines and practice on how best to prepare individuals towards seniority at an early stage of their life with an emphasis on learning, the environment and cultural atmosphere, and sharing knowledge. This is an innovative approach that has not been tried before. Results are aimed at all agents interested in providing training to citizens, members or employees who are close to their third age.

During the meeting, representatives of partner institutions of the project and members of Iceland (U3A Reykjavik and Evris Foundation Ses) Poland (Towarzystwo Wolnej Wszechnicy Polskiej Oddzial w Lublinie) and Spain (UA) discussed the progress made in the second phase of research in this project, which focussed on the analysis and approval of the results of a first individualised study (and  later on, compared) on the state of affairs on preparing citizens for retirement and their entry into the third age in each country and in the European Union. Experts discussed the results from these three contexts as well as the results of a survey conducted between February and May 2015.

The meeting was held in the Alicante city University Venue, at Avda. Ramon y Cajal, 4. This is the second time that the UA host this strategic meeting.