Skip to main content
You are here:
Home / The Conference “Old Age - Between Tradition and Modernity” promoting the BALL Project was held in Lublin on May 22, 2015

The Conference “Old Age - Between Tradition and Modernity” promoting the BALL Project was held in Lublin on May 22, 2015 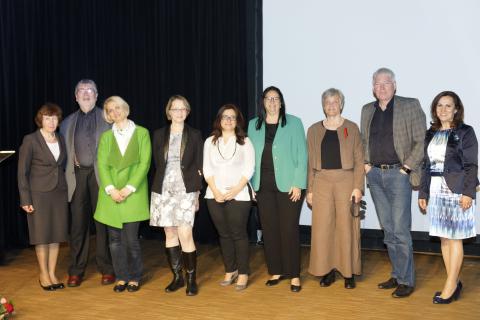 The first part of the conference was devoted to two lectures: one, delivered by Professor Barbara Szatur-Jaworska, a specialist in the field of social policy and social gerontology from the Warsaw University . It was entitled: “Old Age and Old People in Social Policy Perspective”. Professor Jaworska elaborated on the problems of elderly people in Poland, she concentrated on the role of social services, which should not be limited to financial support.

The second lecture was delivered by professor Maria Braun-Galkowska, a retired psychologist from the Catholic University of Lublin: It was entitled  „There are Different Types of Old People”, she opposed the attitude of treating old people as one homogeneous group, and it is well known that there different types of people, it goes for the young as well as for the old. The division suggested by professor Galkowska is done along the line of being active and by the degree of friendly and kind attitude to others, so the groups arising from such a division were identified as: the friendly, gentle , selfish and grumpy.

After the break one of the Ball Project partners, Hans Kristján Guðmundsson  from  U3A Reykiavik, presented the idea of the Ball project and how work on the project has developed so far.  In the end our partner from Alicante, Marian Aleson  talked to the Polish audience about the work done by UPUA in implementing university programmes for seniors, and how social cohesion and citizens' active involvement is promoted. The representatives of Polish U3As were very much impressed by the rich experience of the Permanent University of Alicante, they expressed their wish to go to Alicante and learn from them.

Celebration of the 30th Anniversary of LUTW

After the conference, in the afternoon, all partners were invited to participate in the Celebrations of the 30th Anniversary of the Lublin University of the Third Age. During the ceremony, gracefully led by Malgorzata Stanowska, president of LUTW, several speeches were delivered: Professor Steuden addressed the students of  the Lublin U3A, telling them about the challenges of the third age and their role to be active and engaged in social life of their community. A speech by Krzysztof Zuk, the Mayor of Lublin followed. He said a few words about the local authorities’ policy towards senior citizens, he emphasized the fact, that a lot is being done to make the city friendly for seniors. Then he congratulated the Lublin U3A for doing a great job in the field of lifelong learning. A long part of the ceremony was devoted to awarding medals and diplomas to people who contributed a lot for the development of the Lublin U3A during the past 30 years. Malgorzata, who was assigned the role of reading names for the mayor, so he could concentrate on handing medals, felt awkward to read her own name, so she did not do it, which was a pity, as now nobody knows she was also awarded for her merits. Students who have been U3A members from the very beginning of the university’s activity were awarded the title of “honorable student”, and were given the possibility to participate in all U3A activities of their choice free of charge. Speeches with congratulations for LUTW for its 30 years of activity followed.  When this official part was over, a presentation of Ingibjörg Rannveig Guðlaugsdóttir, concerning her own preparation to retirement followed. Students of U3A were much impressed by Ingibjorg’s  way into retirement and her ability to make effective planning to make her dreams come true. Ingijbjjork ended her presentation with saying that it is never too late to learn.